I started the construction of a hexapod robot named Animabot in 2007.  This was a child dream since the serie “F/X: The Series” in which one there is small hexapod named Blue. This robot was considered as a dog, and since I also want my own “dog robot”.

The goal of this project is to have an animated and responsive robot, a robot which can interact with its environment and the people,  in the same way as Aibo.

Animabot was first made out of Plexiglas and controlled by a BasicStamp 2e. Then I changed the Plexiglas for aluminium and the BasciStamp for a PIC µC. Trough the years, I have made 7 evolution of the board with a PIC 16 then 18 and finally a 32.

Animabot is autonomous thanks to a rear sensor and a front sensor mounted on a moving head. He can move in an indoor or outdoor environment avoiding obstacles. He is also able to stabilize itself thanks to an accelerometer.

Animabot can be manually controlled by an Android application or a computer software, both done by a Bluetooth communication. 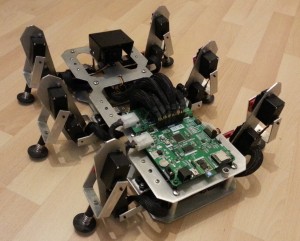