So, while I have been silent on the blog, I have been working hard on the design. Basically, Upper and Lower Bodies are done, only some few tweaks here and there to make all fit together. As you can see in the renderings below, the body shape is mostly the same but I fixed many issues from the previous body. These issues mostly came from the FFM 3D printing process (lack of precision and build volume and my beginner level in 3D printing at that time). The new robot will be printed with SLA process allowing more complex shape and better precision than before.

The Lower body contains the battery, Motherboard and Control Interface. The upper body is composed of 2 parts which allows me much easier assembly and better reliability. The upper body will be constantly screwed to its lower counterparts and the Upper Cover (where most of the devices are placed) will be screwed on the Upper body. As you can imagine, this will allow me to access all the internal part of the robot without removing the legs (which is currently a huge problem on the Rev2), by simply unscrewing the Top Cover. The Head, Rpi, servos are directly mounted on the Top Cover, and connected by only 3 cables to the Motherboard for easy assembly/access.

The Kinematic to lift the Rpi will be a nice feature allowing me to program and access it by the push of a button 😀 The tolerances are quite tight so I hope it will work as expected… This time I also added a small switch on top with RGB led in order to have some feedback/control over the robot (mode selection, battery level, etc..) 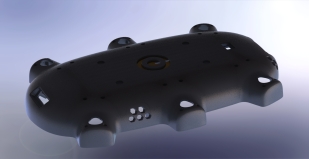